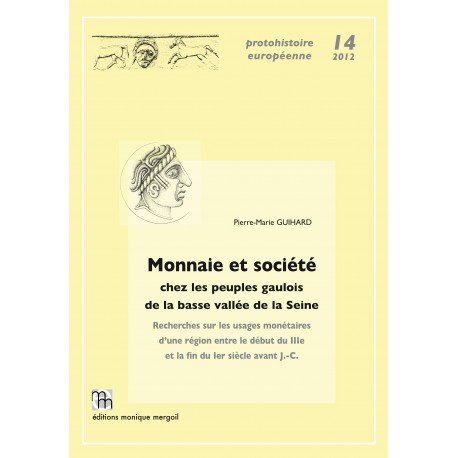 Traditionally, the Gallic’s coin is tackled as the subject of an autonomous study, untied off its environment. Its use by the Celtic of pre roman Gaul has not generated lots of writings, maybe outshined by a monetary art of an exceptional quality. Though, the coin, as every object from the Thought, finds its justification by a function, practical and concrete for the mankind lead to handle it.
This thought process attempts therefore to fill this gap, through precise and representative example: the monetary history of the Gallic’s people in the low valley of Seine between the beginning of the III century and the end of the first century B.C. It replaces from now on the coin in the society which fathers it.
To be able to research the monetary uses it has been necessary to be interested in the choices done by the issuing authorities for the models and designations (weights and standards), but also, to wonder about the meaning of the monetary legends and of the dynamic movements, that is the duration and the destination of the coins in this region. The documentations takes into account close to 4000 coins in gold, silver, potin and bronze, all coming from various environments (treasures, archaeological deposits and isolated discoveries). To have more essence, this previous collection has been compared with two other sources of documentation. One is literary. It has allowed, according to the testimonies of the Greek and Latin authors, to replace the monetary fact in its socio-historical environment. The other one is archaeological. It has facilitated, thanks to its objective thought process, a better perception of the relation of the local populations with the coin. From there, it has been possible to piece together from its origin, at the beginning of the III century B.C., the history of the monetary uses in the low valley of Seine, in the same time providing informations about the socio-economics context in which the coins was used.
This book puts a slant on the aptitude of the Gallic’s societies to build their own monetary systems, far from the cliché of an Astérix using sestertium for his purchases.