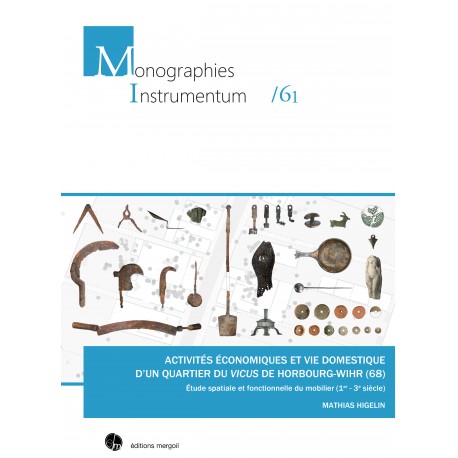 This study concerns a large corpus of Gallo-Roman small finds discovered in a neighbourhood of the vicus of Horbourg-Wihr (France, Haut-Rhin department), located at the North of the Rauracii’s civitas, in Germania Superior. It was discovered during two preventive archaeological digs, carried out in 2008 and 2012 and covered nearly two hectares. A residential area of a "one-street " organized town was excavated. It was occupied from the end of the 1st to the middle of the 3rd century AD. The main interests of this corpus lie in its great typological diversity, its good state of conservation and restoration, as well as in its documentation, allowing it to be associated with its discovery context. The methodological originality of this study consists in the analysis of the spatial distribution in order to restore the purpose of some areas, and thus contributes to the understanding of their organization and functioning of this neighbourhood. A relative diversity of productive activities are found, between handicrafts and agro-pastoral activities: a forge, a bronze-maker workshop producing among others filiform fibulae, a possible woodworking workshop, as well as activities for processing animal products such as leather work. The diversity and numbers of objects, classified in other functional categories, reflect the material wealth of the inhabitants (metal tableware, furniture remains, fibulae, hairpins, game tokens, etc.). These results highlight the decisive economic role of this neighbourhood of the vicus of Horbourg-Wihr.