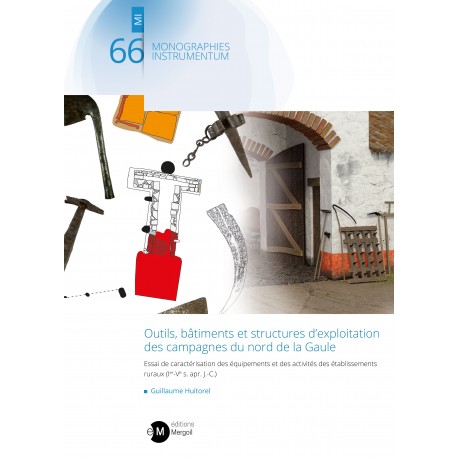 The development of agrarian archaeology and the more systematic exploration of the economic and functional parts of rural settlements offer the possibility of proposing a synthesis on the equipment of the estates of northern Gaul in Roman times. Based on a sample of 140 farms excavated, particularly in the context of preventive archaeology operations, 1,600 movable and immovable assets have been catalogued. They represent more than 70 tools, buildings and structures of different kinds, which, understood by their structure, functioning and function, give a very complete picture of the equipment of the farms at the time of their operation, despite the biases linked to the difficulties of identification and the non-preservation of certain materials such as wood, wicker or leather. The recurrent identification of granaries, barns, drying sheds or even bells, sickles and scythes testifies to a state-owned activity initially focused on agriculture and livestock breeding, as well as on the processing of food products, without however excluding the activities of acquisition and processing of materials for non-food purposes represented by artisanal ovens, hammers or scissors.
The reconstructions and experiments carried out on dryers, tying tools, and splinters, as well as the systematic integration of all equipment into the production process have made it possible to clarify the nature of these activities, which are involved in the maintenance and operation of farms and sometimes even go beyond this framework to participate in the economy of the estates. Finally, the study of certain equipment such as manure pits, hydraulic mills or even the valley encourages the identification of expenditure by the estates on high-performance installations and tools that can, in some cases, be described as innovations. These observations obviously allow us to reconsider certain clichés, sometimes still in force, qualifying the ancient economy as autarkic and stagnant, slowed down by a technical delay and by slavery. The identification and characterization of equipment, on the other hand, reflects the image of a more open economy, associating actors who are different in terms of their built and cultivated surface area, and who all employ, at their own scale, efficient infrastructures and tools.