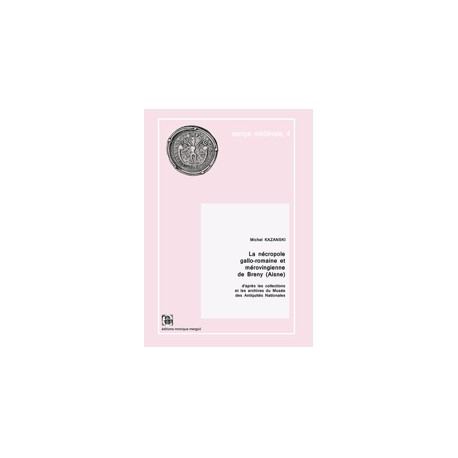 Archaeological exploration by Frédéric Moreau in 1880-81 in the Gallo-Roman and early medieval cemetery of Breny, Picardy, brought to light more than 2200 graves, which he excavated by the rather rudimentary methods of the time. Despite this handicap, the scientific information recovered from the site, and the grave furnishings, now in the Musée des Antiquités Nationales of Saint-Germain-en-Laye, place it among the most important records of both land-use and funerary ritual in the region, ranking alongside the cemeteries of Armentières, Caranda, Sablonnière and Arcy-Sainte-Restitue.
Along with most of those sites, the cemetery testifies to the stability of the High Empire community in the area towards the end of the Merovingian period. The influx of foreign-made objects is standard for the period, and cannot be interpreted as evidence for the arrival of, for example, a large 'Germanic' population. However, a few women of Germanic origin, recognizable by their suites of jewellery, joined the community and were rapidly integrated. A grave of the Low Empire (with sword, axe, and spear) and several Merovingian burials (cloisonné-decorated plate-buckles, high-quality warrior equipment, gold coins...) point to a privileged élite, but these individuals were buried among the rank and file of the population. Careful study of the grave furnishings (suites of jewellery, pottery, glassware, weapons...), which in many cases is all that remains of the graves, allows Breny to be placed once more in the context of the other Gallo-Roman cemeteries in the region and of the local evolution of autochthonous populations over more than six centuries.